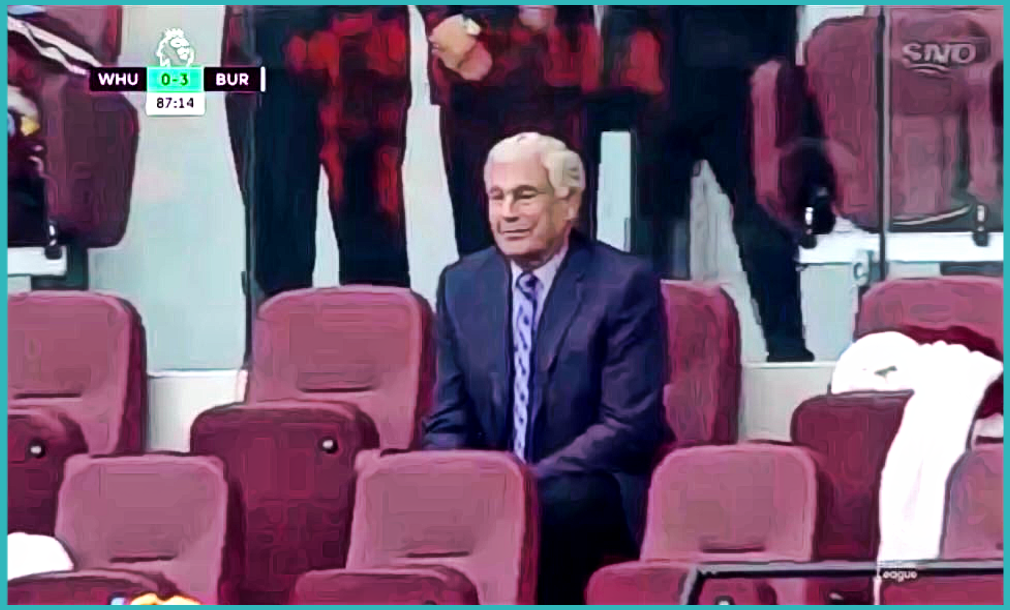 Last man sitting: Cutting a dejected figure, Sir Trevor Brooking sits alone in the directors’ box as others left, fearing for their own safety

I can just about muster the energy to talk about what’s going on in my beloved football club at the moment. I’ve been a season ticket holder for over 25 years and have followed West Ham United through (seldom) thick and (mainly) thin; occasional ups, but mostly downs.

West Ham supporters don’t ask for much. We know we are a reasonably small club no matter how much East End tradition is associated with us; we know that we won’t be near the top of the league or challenging for silverware. All we ask is that the players give their all while wearing the shirt, we have a bit of a chuckle in the stands, and that the team plays entertaining football with players who get us out of our seats.

The final game at the Boleyn Ground, more commonly known (and incorrectly) as Upton Park, was a truly magical night and one which I will never forget. And who better than against one of the biggest clubs in the world and an old rival, Manchester United. Despite being hundreds of miles apart geographically and billions of miles apart in status, there was always something special about Manchester United visiting the Boleyn.

It just had to be — Winston Reid rose above the Manchester United defence to head home the winner in the dying minutes. The place erupted. In a nice twist of fate, it was a central defender who scored the last ever goal at the Boleyn Ground, in front of the Bobby Moore Stand. A beautiful closing ceremony followed, and Bobby Moore was seen to flick off the light switch for the very last time, and the ground was plunged into darkness.

It was done. The Boleyn Ground had seen her last game, and we gave the old girl a fitting send-off. The bulldozers would soon be moving in, and we were off to pastures new: the London Stadium in Stratford. There were grown men in tears that evening — but leaving our beloved Boleyn was reluctantly accepted at the mouth-watering thought of taking the club to the next level.

“We will provide, on the pitch, the best team possible, for our manager to go out there and win things”, she added. Fast forward two years later and the club has found itself in two relegation scraps. The signings have consisted of unknown players on loan who aren’t good enough for the Premier League, to over the hill players in their mid-30s, and nobodies plucked from the Championship: Jordan Hugill. Jordan Whogill? I hear you say.

David Sullivan even went on Sky Sports during the weeks leading up to the final game at Upton Park, stating that the club had submitted two £30-35 million bids for two forwards. Call me cynical, but it was a great ploy to ensure people renewed their season tickets — the thought of a £35million forward in claret and blue. West Ham fans are still waiting for that £35million forward, nearly two years later.

Much like the fans had no choice in leaving The Boleyn, the club’s crest was also changed during the transition from Green Street to Stratford. The word ‘London’ was placed on the badge. ‘London’ is quite a broad term; it could mean Chelsea, Arsenal or Spurs. I think I speak for the majority of West Ham fans who wanted ‘East London’ to preside on the badge, in a desperate attempt for the club to keep some of its identity. In another move to make West Ham United FC more of a corporate and worldwide recognisable brand, London was used. We all know that ‘London’ will probably sell more shirts in the Far East than ‘East London’.

“That’s our ambition — a world-class stadium with a world-class team and a powerful mix of the best football has to offer in the UK”, Karren Brady went on to say. The West Ham faithful got a world-class stadium alright — for athletics. Parts of the ground resemble scaffolding on a building site, the top and lower tiers don’t connect, the fans are too away from the pitch, and the walkway between the two tiers ruins the whole flow of the stadium. It’s very off-putting as a spectator when during a game, you can see people wandering around with their pies and drinks on a walkway between the top and bottom tiers.

The sad fact of reality is that both the team and stadium are far from “world class”, and certainly not amongst the best football has to offer in the UK.

Supporters’ tensions boiled over at West Ham’s 3-0 home defeat against Burnley at the weekend. Four men ran on to the pitch — skipper Mark Noble wrestled one to the ground. One seized a corner flag and held it aloft in the center circle before attempting to plant it in the center spot. Many gathered around the directors’ box in protest (curse that damn walkway between the two tiers again). The chants directed at the owners weren’t pretty.

While some of the aggressive behavior seen at the London Stadium at the weekend was unacceptable, one man’s corner flag protest was a symbolic gesture. It was a more peaceful (if illegal) demonstration which stood for something more significant — a throwback to 1992 when a supporter did the same at the Boleyn Ground to demonstrate against the club’s proposed bond scheme. The bond scheme was eventually vetoed after much pressure from the fans.

The board must now look upon themselves as to why some West Ham fans felt such drastic action was needed to get their voices heard.

Toxic and rotten through the core; Lady Brady along with Messrs Gold and Sullivan sold the West Ham faithful a dream, but have so far delivered a nightmare.