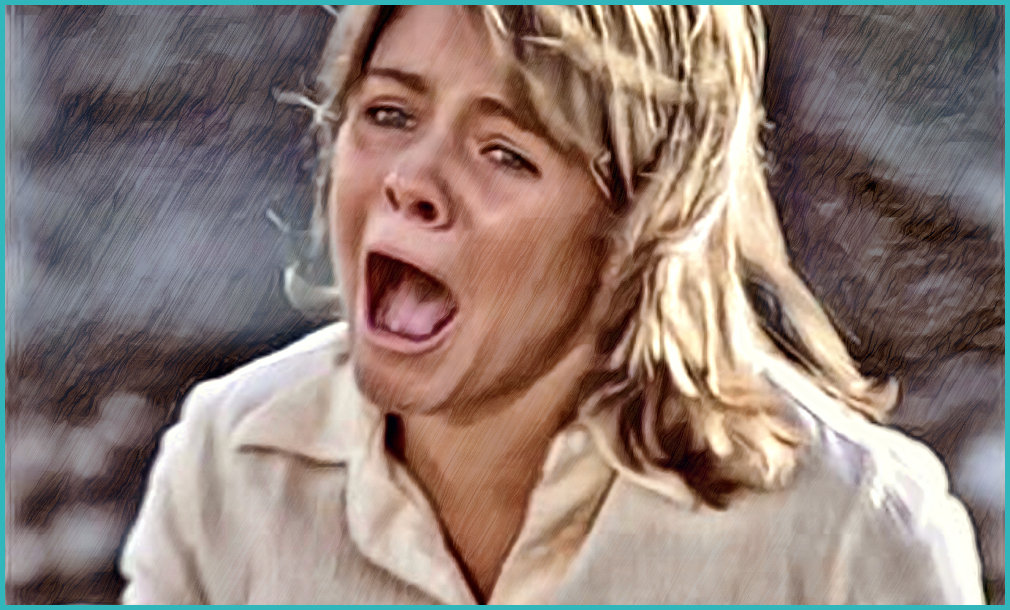 "She wasn't looking at me. I'm thin. I wear glasses. I live in Amity Island year-round. I'm not good enough for her" — looking back on Jaws 2

"She wasn't looking at me. I'm thin. I wear glasses. I live in Amity Island year-round. I'm not good enough for her" — looking back on Jaws 2

There have been plenty of bad "number twos" over the years, but rarely epic ones. Jaws 2 is the latter. '70s hair and big, steel-rimmed glasses aplenty, it's one of the earliest teen slashers.

Richard Dreyfuss chose not to reprise his role as marine biologist Matt Hooper due to Steven Spielberg not directing. Roy Scheider was also dead against returning and only starred in the film to end a contractual issue with Universal.

Apparently, he was unhappy during production and had several heated exchanges with director Jeannot Szwarc. Testament to Roy, he put in another flawless performance — even though he didn't want to be there. He's a fine actor.

So, Martin Brody is back with a yellow barrel from Quint's ORCA as a makeshift flowerpot. His shorts are tighter, his tan is oranger, and the Amity Island sand is whiter. Jaws was filmed on Martha's Vineyard's golden beaches in Massachusetts; Jaws 2 was filmed at Navarre Beach, Florida. 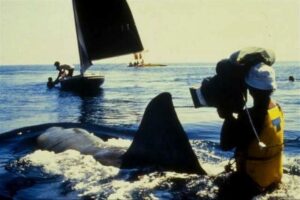 Brody is sure a Carcharodon carcharias has come to take revenge at Amity Island for his destruction of a fellow great white two summers ago. Yet the revenge angle was saved for Michael Caine in 1987.

Brody's early instincts as he stares into the ocean after a boat explodes are correct. There's little to suggest a shark was involved, but Brody just knows.

Unlike Spielberg, Szwarc doesn't keep the shark hidden, and we see the predator early in the film. Brody shoots up the beach, and we feel sorry for him. We don't feel anything but squirm for Len Peterson, an Amity official who's built a new resort in the town to attract tourists with one thing on his mind: money. Joseph Mascolo plays the slimy character brilliantly. 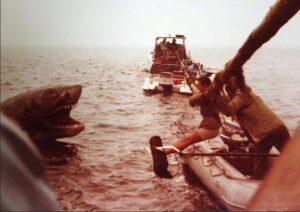 You can't help but feel utter contempt for the teens as they jump up and down and roar on their rafts when they believe they'll be rescued. THAT'LL ATTRACT THE SHARK, GODDAMMIT!

Larry Vaughn hasn't learnt his lesson, either. What's lacking from Jaws 2 is Vaughn's and Peterson's reactions to Brody's "I told you so". There's a short fallout scene between Brody's wife and Peterson, but it's rushed. It needed a Vaughn and Peterson licking Brody's boots scene — like in Jaws when Vaughn is mumbling he "was acting in the town's best interests". His kids were on that beach too!

The violent deaths work. Marge's demise is genuinely heartbreaking, and the shark smacking Eddie into the side of a boat before devouring him is mighty. Ann Dusenberry puts in a powerhouse performance as Miss Amity, Tina Wilcox. It's a shame the extended death of the helicopter pilot was left on the cutting room floor.

Jaws 2 will always be compared to Jaws. As a sequel or viewed as a standalone film, it's solid. John Williams' score is worth the entrance fee alone. If Jaws didn't exist, 2 would be one of the greatest horror films ever — and certainly the most elite shark film. It's not as good as Jaws, but which film is?