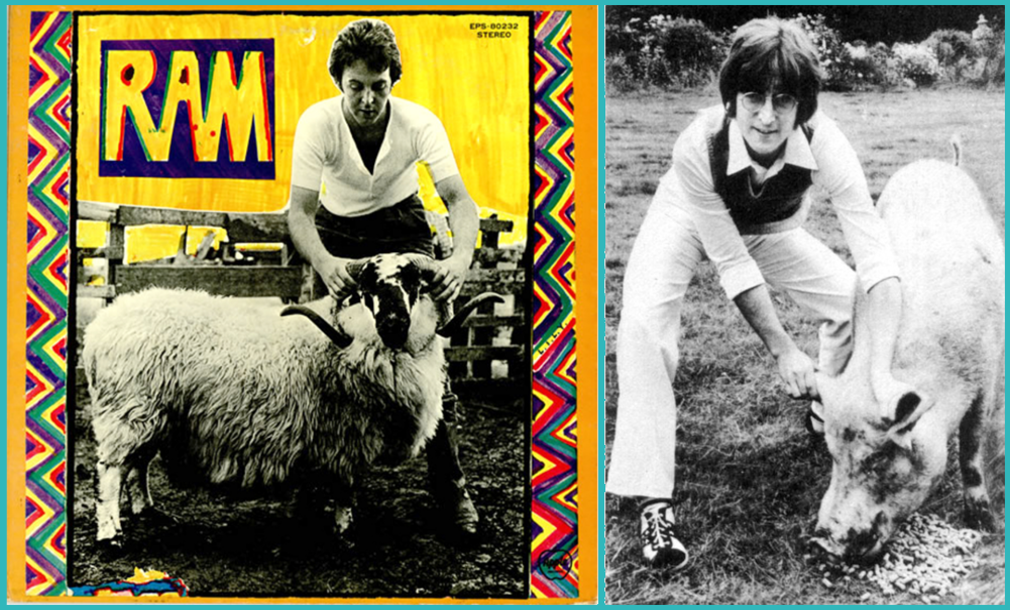 While John Lennon (with the help of wife Yoko) was crafting songs about tormented child-parent relationships, psychological suffering, religion, working-class heroes, God, Jesus, Adolf Hitler, dope and cocaine in his 1970 masterpiece John Lennon/Plastic Ono Band, Paul McCartney (with the help of wife Linda) was busy creating a home-baked masterpiece of his own: RAM. Despite the two albums being chalk and cheese, I consider them to be two of the greatest ever made.

In typical McCartney fashion and contrast to his former songwriting partner, Paul opted for less controversial and emotionally straining subjects. A a range of domestic matters surrounding him and his family on his farm in Scotland were the subjects of his lyrics: flies flying in and out, cats, kittens, dogs (some with three legs, some with none), horses, sheep, smelly feet, pyjamas, cups of tea and butter pies.

RAM is just over 43 minutes of homely domestic bliss: from the hand-drawn album sleeve featuring the family photo collection — to songs about McCartney’s love of all things animal in “the heart of the country” — to love songs about his “long-haired lady”, Linda.

Farmyard and domestic animals aside, some of McCartney’s lyrics do have a deeper meaning and are quite cutting: from the opening line, “piss off, cake” (the “cake” being Yoko Ono), to digs at the peace-promoting couple: “too many people preaching practices, don’t let them tell you what you wanna be”. “That was your first mistake, you took your lucky break and broke it in two”, sings McCartney as he berates his fellow former Beatle. One can presume that Lennon’s “lucky break” was The Beatles and the chance to write with McCartney.

Despite John Lennon believing that some songs on RAM were directed at him and Ono, McCartney later claimed that he only aimed the couple in the album’s opener, Too Many People. There was, however, a more obvious reference: a photo of two beetles mating on the back cover, which represented how McCartney felt that the other Beatles were ‘screwing’ him over.

Amidst the war of words between Lennon and McCartney, conducted via the music press, Lennon’s responses to McCartney’s digs on RAM were scathing. These much more apparent attacks made McCartney’s look very subtle indeed: How Do You Sleep? from Imagine — a whole track in which Lennon launches a tirade of abuse on McCartney, and a postcard inside the album featuring Lennon pulling the ears of a pig — an obvious mickey-take of the front cover of RAM.

McCartney later recorded a peace offering in his follow up album, Wild Life, in a song titled Dear Friend and the pair eventually got talking again before Lennon's untimely death in 1980.

Taken to the slaughter by music critics and John Lennon, RAM didn’t stand much of a chance in 1971, but 47 years later, it’s still very much alive and as wild as ever.