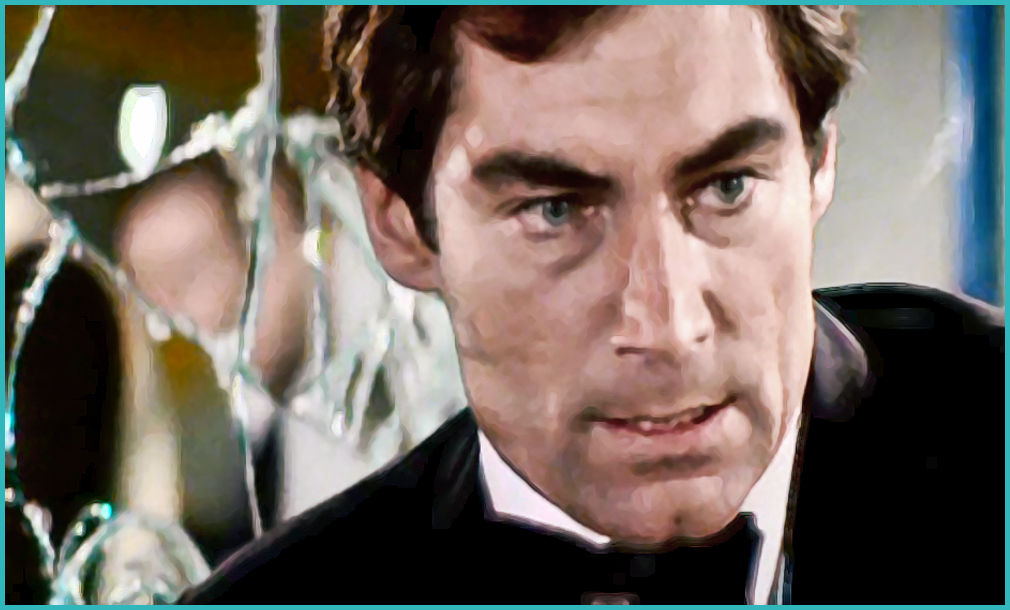 Rage against the machine: Bond's balloon-popping fury in The Living Daylights

"It was part of his profession to kill people. He had never liked doing it and when he had to kill he did it as well as he knew how and forgot about it" — Ian Fleming, Goldfinger, 1959

Dr No, incredibly violent for its time in 1962, contains what is arguably one of Bond's most famous on-screen kills.

James Bond, played in the guise of Sean Connery, coldly dispatches Professor Dent in the bedroom of Miss Taro's house with his Walther PPK plus silencer.

"That's a Smith & Wesson. And you've had your six, comes the famous Connery line, as Bond shoots Dent. He even pummels a further superfluous bullet into the professor's back as he lies on the floor dead.

The look Bond gives Dent's lifeless body says it all — he wasn't particularly keen on executing this death, but it was part of his profession to kill people. "Those I kill are themselves killers", as Roger Moore's 007 snarled to Fransisco Scaramanga across the dinner table in The Man with the Golden Gun.

Connery's Bond was often in real danger; the viewer can frequently feel the Grim Reaper closing in on him. He is helpless on his knees at Grant's mercy in From Russia with Love. He's close to getting decapitated in a lift at the hands of Peter Franks in Diamonds are Forever. There is sheer panic on his face as Goldfinger's laser beam approaches his crotch — Bond spits out words in the desperate hope one will hit the target and change the villain's mind about killing him.

There was humour in Connery's nuances: Bond expresses sardonic despair in Goldfinger as Q plans to deliver an hour-long lecture. There is a wry smile on Bond's face in Diamonds are Forever when he tells Peter Franks he speaks English despite asking:

"Who is your floor?"

Bond delivers a shocked, wide-mouthed look of disbelief to Tiffany Case as she tells him he's "just killed James Bond!" and a schoolboy smirk as he asks Plenty O'Toole if she was named after her father, having just ogled her breasts. It's a perfectly poised moment in a smutty but very amusing quip. Sean Connery's tongue-in-cheek performance in Diamonds Are Forever paved the way for Roger Moore's light and breezy tone, where liberal use of sexual innuendo would be rife.

There was remorse, guilt and controlled anger in Connery's Bond: In Goldfinger, 007 silently stares into space as he mulls over Jill Masterson's death by gold paint. One can almost hear his mind plotting revenge, in full realisation he was the one responsible for her death, having lured her to betray her master.

And there is depth: how Bond gazes into the Ken Adam-designed fish tank bed in Diamonds Are Forever contained every piece of damage Bond has ever been through in one detached and understated scene.

George Lazenby: the emotional Bond. The Bond who falls in love and marries. Despite the Australian having no prior acting experience and replacing one of the biggest film stars on the planet, he does remarkably well. Most notably, in the final scene of On Her Majesty's Secret Service, when his newlywed, Tracy, is murdered:

"It's all right. It's quite all right really. She's having a rest"

Bond was crying inside — Lazenby wanted to cry outside too — but "James Bond doesn't cry", barked director Peter Hunt. Fast forward 43 years later, and James Bond does cry: Daniel Craig in Skyfall at the death of M.

There is also a beautiful moment when Lazenby's Bond looks genuinely scared and vulnerable, as if the end is near. Bond sits by an ice rink in a picturesque Swiss village and pulls the collar of his coat up to cover his face — "There are people after me", he tells Tracy as she unexpectedly skates up to him.

In For Your Eyes Only, Bond looks equally frightened, and that's not something you could often say about Roger Moore's Bond — but he conveys fear magnificently in this particular sequence.

Here, Kristatos's heavies, Klaus, Emile Locque, and East German biathlete Erich Kriegler are stalking 007 as he makes his way up to the top of the Olympic ski jumping hill in Cortina. The henchmen give Bond the stare of death in the lift, and Bond looks helpless as he mingles in with the tourists.

07 also does something else in For Your Eyes Only, which isn't synonymous with Roger Moore's Bond or any other for that matter: we see Bond bottle it.

He backs out of jumping the hill when he spots Kriegler below, rifle in hand, ready to assassinate him, only to realise it's his only option when he finds himself cornered — with Locque behind him, gun pointing through his jacket pocket. There are no gadgets or one-liners to get him out of this one; Bond must rely on his wits and skill to escape the inevitability of death.

Bill Conti's score ramps up the tension, and Bond looks well and truly out of options. He jumps the jump, and what follows is more stalking in the woods by Kriegler, more look of sheer terror on Bond's face when he loses his PPK in the snow, and one of the most exciting action sequences ever seen on film, with Conti's pulsating score thrown into the mix. James Bond is a desperate man on the run, as the Conti track Runaway suggests.

Moore's Bond was often disgusted, probably because of the late actor's fear of guns and violence in real life. He shows absolute contempt for Zorin as he kills Sir Godfrey Tibbett and Howe in cold blood in A View to a Kill: "Don't bother, Stacey. He's a psychopath", he scowls.

Bond looks nauseated in the scene from Live and Let Die when Solitaire tells him he will not succeed upon first meeting: "Rather a sweeping statement, considering we've never met". He swiftly cuts off Anya at the mention of his dead wife in The Spy Who Loved Me and looks repulsed at the thought of eating a stuffed sheep's head in Octopussy.

There is utter disgust as Francisco Scaramanga suggests he and Bond are comparable and both gentlemen: "I doubt you qualify on that score", Bond hisses with much venom. The nauseated look was one of Roger Moore's specialities — there was certainly more to his visual acting than a raised eyebrow.

Timothy Dalton was full of nuances and colossal attention to minor detail, making his Bond so great. The suspicion of cigarette smoke he blows out while listening to Koskov's story, how he winces having just sipped a lousy cup of coffee at a fairground, and how he slightly adjusts his grip on the butt of his gun while holding General Pushkin at gunpoint.

Dalton had Bond stare on coldly as he watched Killefer being mauled to death by a great white shark in Licence to Kill, and there is pure balloon-popping rage in Bond's face and hands after fellow agent Saunders is killed in The Living Daylights by a booby-trapped sliding door.

Dalton's Bond was every bit the merciless, calculating and professional assassin, and the stage actor was meticulous in delivering what was going on in the mind of James Bond to the audience non-verbally.

During Licence to Kill's explosive finale, Bond destroys Franz Sanchez's tankers of Columbian pure and sends the drug kingpin to a fiery gave in one of the most graphic death scenes in the series. Suit torn and looking more beaten, broken and bloodied than we've ever seen him before — Bond perches on a rock, takes a sharp intake of breath and holds back the tears as his head drops.

It wasn't until the Daniel Craig era that we saw Bond as battered in Casino Royale. Craig's piercing blue eyes demonstrated a steely determination not to give Le Chiffre that password, no matter how hard he beats his manhood and testicles with a piece of rope.

James Bond, perched on that rock, is full of exhaustion, sadness, and grief — but relief — his revenge mission is finally all over. Sadly, so was Dalton's reign as Bond.